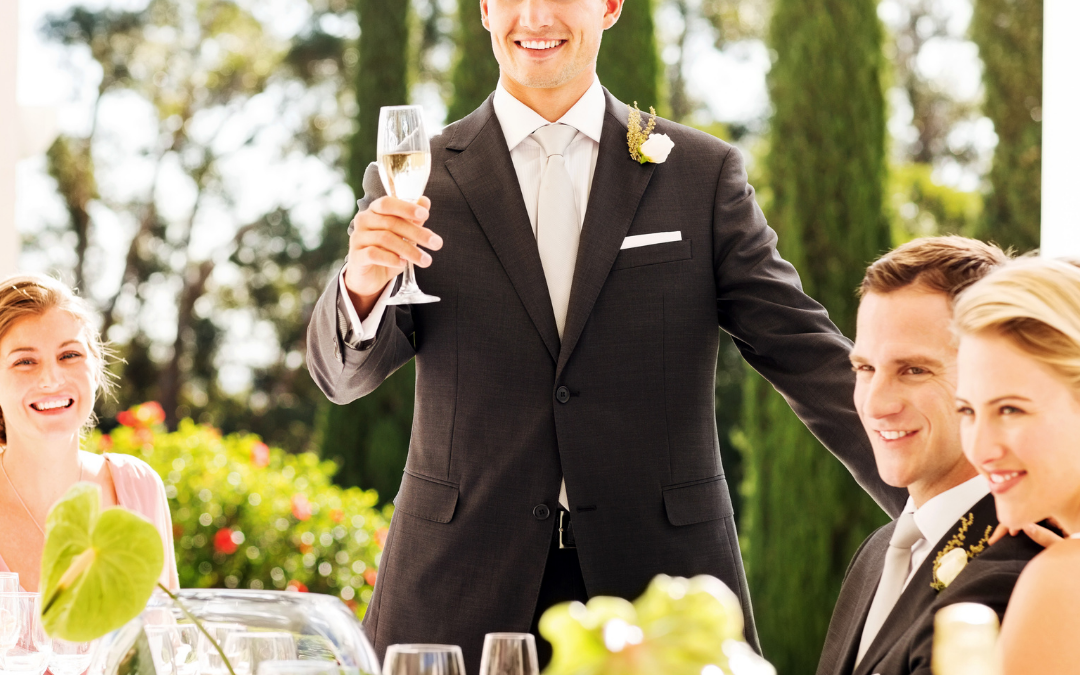 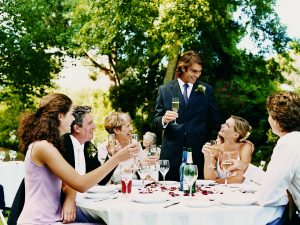 This is a simple guide to making your wedding speech.
It answers some of the most frequently asked questions,
and gives you some tips on making it as easy as it can be.

How do I Stop My Knees from Shaking?

I won’t tell you that you won’t get nervous, because the plain fact is, you probably will. But you should know this: most people do. In fact, if there’s no adrenaline, it probably won’t be much of a speech. The important thing is to keep it in perspective. Just use these tips, and you’ll find that there’s nothing to worry about.

For starters, remember that you’re not taking an exam; you’re talking to your friends. Your friends and family are the warmest audience you’ll ever have. They’ve come to your wedding, and they’re on your side. Think of it as a bigger dinner party than usual – and it’s your turn to tell a story. Just relax and remember how comfortable you would be back at the dinner party – then go ahead and tell your story.

Here’s another tip. It’s the waiting that’s more likely to make you nervous. Once you’re on your feet, and you’ve started talking, as long as you know what you’re going to say, it’s suddenly a whole lot more fun. So remind yourself of that as you’re sitting and waiting, and make it easier by repeating your first line to yourself. That way when you get to your feet, and the room goes silent, you won’t suddenly freeze. Instead, you’ll just say that line you’ve been repeating to yourself over and over. And with that out of the way, you’ll find the rest just follows.

What is All the Rules I Need to Know?

The usual routine is this:

But you don’t have to do any of that. It’s all a question of saying the things that matter to you and having the people who matter to you involved. Choose the people who you would like to say something to, decide who should be recognized and thanked, and then work out an order that suits you best.

It’s always a good idea to have a Master of Ceremonies because they can keep it all in order, and you really should have someone to introduce all the speakers. But apart from that, choose what seems right for you.

One of the ways you can make it particularly interesting is to make some unconventional toasts. For example, each speaker could choose a year that they think is particularly appropriate to toast. (For example “1976, because that was the year that…”). By taking this approach, you give people the chance to think about things in an original way, and have more of a chance of steering away from making speeches that recite all the usual platitudes.

How Should I Prepare?

Write a speech to practice as soon as you can. That’ll give you more time to hear how it sounds, and adjust it so it sounds like your usual style of speaking rather than your usual style of writing. And, more importantly, it’ll make you so familiar with the speech that by the time you stand up, you’ll know just what you want to say.

Once you have it written, practice whenever you can – in the car, in the shower. The more you prepare, the more confident you’ll be.

When is the Best Time for Speeches?

You can have the speeches at any stage you like, but generally, they tend to be most successful before you eat, and after people have had some time to mix and drink.

What Else do I Need to Know?

Be yourself, and speak your mind. This is a chance to say some things that mean a lot to you about people you care about, in front of all your friends and family. That’s not a chance people get very often, so make the most of it.